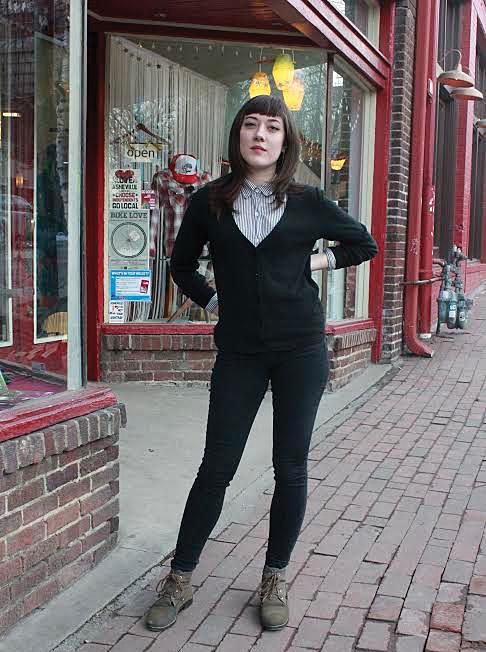 Amanda Fulton, prospective shoemaker and designer
Tell me a little bit what you like about shoes.
“I’m going to want to make shoes that fit my identity to an extent. I’m queer, but look incredibly femme because I feel like I’m not a girl, so it’s more fun for me to wear eyeliner than it is for me to wear clothes that make me look masculine.”
“I want to do that with shoes eventually, which is to figure out how to do leatherwork and make shoes in a way that is kind of genderf***ed. The pairs that I’ve made so far and the designs that I have so far are really tough and masculine, but have cutouts in places where they wouldn’t normally be, and I need to figure out how to do that with shoes that would traditionally be for men. Specifically, I would like figure out how to make them sexier and a little more feminine.”
Describe your relationship with style.
“Because of my weird gender dysphoria that I get sometimes, the way that I want to dress changes every hour.  I have decided recently that if I keep black as a staple, it makes it a lot easier to get dressed. I’m kinda all over the place right now, but I like to have a lot of furs, which is kind of weird because I’m vegan. I like to have a lot of furs and lots of leather and things like that as accessories. Everything else is just like cuts that I like and necklines that I think are good. I also like to look mean if I can. I’m kind of small and super feminine and get approached by people that I don’t necessarily want to talk to. Since I’ve been wearing all black and looking angry, people sometimes are a bit wary to talk to me. I tend to launch into hyper-political angry speeches about stuff, which is scary to a lot of people, to be sure, and it’s probably made a lot more intense by the fact that I’m dressed like death.”
Describe your style evolution.
“When I first moved here, all my clothes were from the bins. I don’t even know what I was thinking. I was going through all my old clothes from the last few years and all of them have holes in them and they’re all just super s***ty quality things. I just decided that I need to grow up a little bit and start dressing better and looking like I want to look every day. I feel more motivated when I look well.”
Creative inspiration?
“Anarchism and, I don’t know, anger. Just really f***ed-up feelings inspire me creatively. It’s nice to have an outlet where you’re making something that you can be excited about after the fact. It’s nice because if I feel stressed out about something, I just lock myself in my studio for four days and I come out with all these wallets and bags. It’s really fun to give them away to all my friends, especially when they’re stressed.”
This column was originally published in The Blue Banner.
Labels: 2014 Asheville Beat From the Street interview Larisa Karr NC Q&A The Blue Banner UNC Asheville UNCA USA