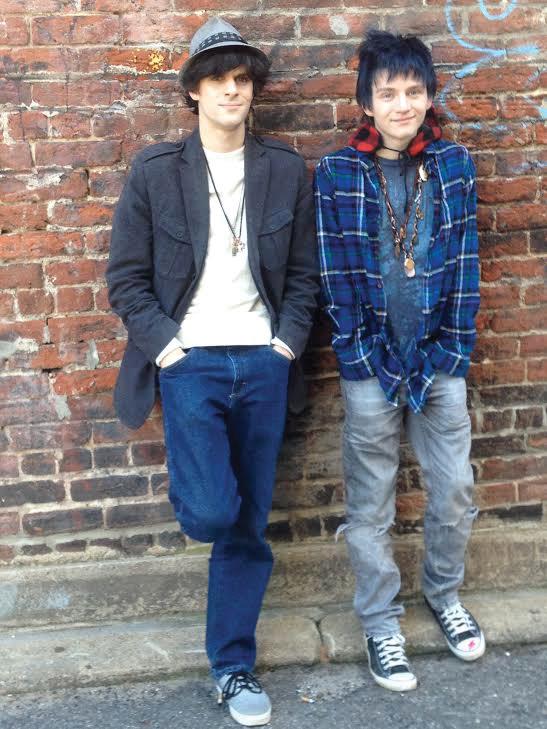 Nathaniel Wimpy, left, history student at UNCA
Tell me a little bit about your style.
“I guess I tend to go towards darker clothing — a lot of greys and blacks and cold-weather clothing. I like hats and sweaters and jeans but hate summer attire, t-shirts and all that stuff. It’s boring to me. I don’t think I wear anything besides jeans actually. Vans are my go-to shoes.”
What’s your style philosophy?
“Do what you want. I don’t really have a philosophy with clothing particularly.”
Creativity-wise, what inspires you?
“I kind of go through my life and my day and hopefully see something that’s particularly cool. I’m a history major, so I draw a lot of inspiration from the past and what I read about it, studying the Crusades specifically. I draw a lot of inspiration from feudal systems, knights, stuff like that. I also am inspired by music.”
What do you listen to?
“I have a tendency to listen to absolutely everything, aside from country, specifically I listen to a lot of Of Montreal. They’re one of my favorite bands and they’re from my home town, Athens, Ga.”
Describe your style in one word.
“Me.”
Dustin Hicks, right, art student at UNCA
Tell me what inspires you creativel.
“As far as art goes, I’m really drawn toward anything that’s extremely expressive. I don’t like to just dwell on too much realism and I don’t like to go completely abstract either. It has to be something that has a lot of power and meaning that makes people think about things. I like Banksy, Dali, Picasso, of course. There’s an artist who lives here in Asheville that I’m a pretty big fan of. His name is Gabriel Schafer. I’ve really been affected by his work too.”
Is your hair blue or black?
“It’s kind of a weird blue-black. I don’t know. It was actually called ‘Starry Night.’”
What kind of clothes do you gravitate towards in the morning?
“Usually something blue, I like blue. Basically a combo of comfortable and something akin to what I’m feeling that day.”
Style philosophy?
“I wouldn’t say I really have much of a philosophy about it. It’s just like anything that I can find that’s cheap and kind of cool, I’ll wear. My necklaces and hair are the only things I always wear, as they have specific meaning. I have a rule that if anybody gives me anything, I have to wear it. So, these gloves were also a gift and every one of these necklaces has something to do with someone. Usually my mom makes them for me. The hat was something I got with a friend and it’s mostly because of Catcher in the Rye.”
Thoughts about Asheville?
“I really do like the city. There’s a lot of diversity here, and it’s something I’m not usually accustomed to where I was from in Wilkesboro, which was pretty straight forward, conventional and very conservative. So I really specifically wanted to go to a place where I felt people were being more creative, loose and free with what they wear. I think people inspire me here in terms of clothing and also in the presentations of what they want people to see of themselves. There was one time I came downtown with a friend and there was a face painter dressed up like a fairy. It was really cool. She had flowers and everything placed in her face paint. Just a normal occasion, she was just being a fairy.”
This column was originally published in The Blue Banner.