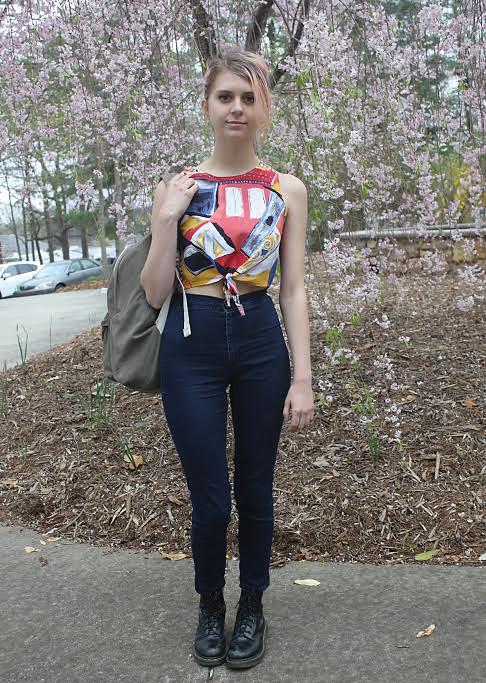 Megan Braaten, a new media student and Charlotte native
Tell me about your style, this outfit for instance:
“I go for comfort most of the time and I don’t really wear things that I’m uncomfortable in, sometimes I do, but I’m always happier if I’m wearing something that I can just do whatever in. That’s usually important.
“I get a lot of inspiration from the ‘80s and ‘90s basically. I’ve recently got into the 2000s a little bit, it’s just like wearing two different versions of the same color, which is kinda dope.
“I basically only shop at American Apparel, other than Goodwill – I don’t really count that because I don’t go there often, but if I ever go online shopping anywhere, I go to American Apparel because it’s made in America and most of the stuff I’ve got from there hasn’t broken or faded really.
“I don’t mind spending a little bit more extra money to know that it’s made in America and that it’s not going to fall apart, rather than with Urban Outfitters and Forever 21.”
How would you say that the music you make influences your creative aesthetic and how you dress?
“My music is very ambient and it has a lot of inspiration from Cat Power and ‘90s kind of stuff. It’s really slow and it’s unintentionally sad.
“I wear a lot of black and not a lot of color that often. If I do, it’s mostly darker colors. I’ll either wear black or all white – I’ll never wear pink or colors like that.
“I’ve kind of gotten into that recently since I’ve bleached my hair and dyed it pink and stuff, but whenever I picture myself onstage somewhere playing music, I always picture myself in a black turtleneck dress and that’s it. I never picture myself wearing anything else other than all black.
“Sometimes, I’ll be wearing clothes that’ll make me think, ‘It would be really strange playing music in this, since it doesn’t match the music at all.’ But I think if I actually started becoming famous for my music and people knew me for my music, I would definitely commit more of my clothes to that aesthetic, but that’s not really a thing now, so I kind of just do whatever I want.”
So you’re willing to change?
“Yeah, well, I feel like I’m actually willing to focus in on more of one kind of style. I feel like I just kind of change from day to day what I want. It’s all really simple though. I never put on anything that extravagant.”
How do you feel about the overall fashion scene at UNC Asheville?
“It sucks. It sucks, but I don’t care. So what? I don’t know, it’s just kind of boring. I didn’t really expect anything different. There’s probably 10 people overall that I’ve seen that I’ve thought actually had decent fashion taste, but in general, I walk around and I don’t really see anything that catches my eye.
“Say if I went to school in Brooklyn or somewhere like that, I’m sure I’d be drowning in people that look awesome. I’m honestly not that impressed by the students here. I’ve even gone on the Look Book and said ‘Why?’ I don’t consider sweatpants a thing anymore. They don’t count.
“My roommate – Brandy Neal – her clothes are awesome though. I love her. We forget whose clothes are whose sometimes, because we have all black everything. We’ll ask each other, ‘Are these your pants or are they mine? I don’t know.’ It’s great.”
This column was originally published in The Blue Banner.
Labels: 2014 Asheville Beat From the Street interview Larisa Karr NC Q&A The Blue Banner UNC Asheville UNCA