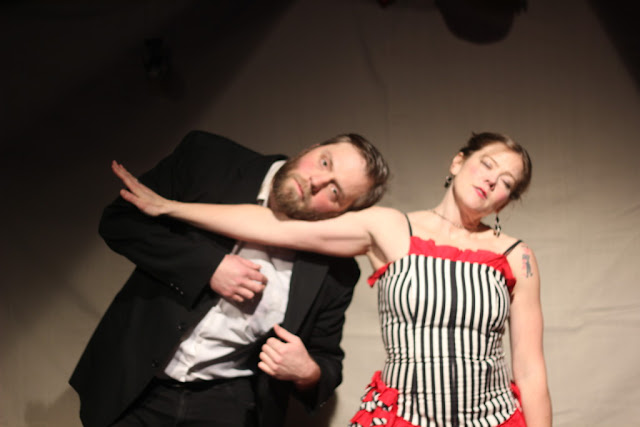 Call it a sensory experience. Call it an arts experiment. Call it alchemy. The 13th annual Asheville Fringe Arts Festival will take over the city streets Thursday through Sunday.
Asheville Fringe incorporates music, dance, theater and spoken word in its selection of multimedia art pieces.
“The festival provides an opportunity for local artists to develop new and experimental performing and performance arts projects,” said Jocelyn Reese, artistic co-director of the festival.
Just as importantly, Fringe allows underground talents to bring their works to fruition in the presence of live audiences.
Reese pointed out that this year, the festival will also feature out-of-town artists who have performed in other Fringe events around the world.
“We want to enrich the opportunities for local artists to see work from other places and to experiment with their own work,” Reese explained.
Asheville Fringe is part of a global network of Fringe arts organizations that modeled themselves on the Edinburgh Festival Fringe, sometimes called “The Fringe,” the largest arts festival in the world. Edinburgh Fringe began as an avant-garde alternative to the Edinburgh International Festival, and although it originally stood on the edge of the main event, the Fringe eventually displaced the headliners as the center of audiences’ attention.
Among those inspired by the open, innovative atmosphere in Edinburgh were Susan and Giles Collard of the Asheville Contemporary Dance Theater, who decided to bring this global movement home. Since its founding, Asheville Fringe has spread across downtown to venues such as Toy Boat Community Arts Space, The Odditorium, The Mothlight, The Forum at Diana Wortham Theatre and the BeBe Theatre.
Many of the festival’s performances are site-specific, including one of this year’s pieces, “dis·card” which Kathy Leiner, a dance instructor at UNC Asheville, conceived for Grove Arcade. Leiner is the director of this dynamic “movement piece,” and she selected members of her dance group, Moving Women, along with students from her UNCA dance class, to perform it.
“The piece was originally inspired by the fact that some very loved people have lost their jobs this year and by this idea of how we discard people and things — the emotional and intellectual process of discarding,” said Leiner.
She said she chose Grove Arcade as the performance site for “dis·card” because, as a repurposed historic building, it is a place of abandoning and becoming.
Leiner said she also thought of “dis·card” as a coming together of old and new perspectives and of different experiences. The oldest person performing in the piece is a woman in her 60s. On the opposite end of the age spectrum, Benjamin Newnam, 20, and Alexandra Griffin, 21, are two of the UNCA students who will perform in the piece.
“Fringe provides an opportunity for artists to navigate the boundaries of what is considered dance and how dance impacts and is impacted by the environment it is performed in,” Newnam said. “It also is an excellent opportunity for young artists to collaborate and learn from more experienced artists in the Asheville dance community.”
Newnam and Griffin said they are excited for the new experiences that Fringe 2015 will offer to performers and audience members alike.
“My joy for Fringe is boundless. The Festival is a great opportunity for artists of all backgrounds to showcase their work, however unconventional it may be,” Griffin said. “I hope our performances shed light on the uneven corners of dance and movement that people tend to overlook.”
Both students said they put their hearts and souls into their work as dancers, and said this kind of personal investment is what is so inspiring about Fringe.
“Dance is something I love, and this will be an opportunity to share this love with a new audience in a different way than I ever have before,” said Newnam.
As for why UNCA students should attend Fringe, Griffin said the festival is a great way to nurture the community by supporting friends.
“Come out to see the show!” said Newnam. “It will inspire you and touch you in new and creative ways! Also, if you get the chance, find a way to be a part of it next year. It is truly a life-changing experience. One for the memory books.”
Asheville Fringe is presenting “dis·card” as part of its Random Acts of Fringe lineup, and this means it is free of charge and open to the public. The event will take place at Grove Arcade at exactly 12:01 p.m. on Friday and Saturday.
Tickets for other performances are available for purchase online at AshevilleFringe.org until 24 hours before each event, or at Fringe Central, hosted by the LaZoom Ticket Booth at 14 Battery Park Ave, at any time prior to an event selling out. The festival website features a list of all performances, including Random Acts of Fringe.
This article was originally published in The Blue Banner.
Labels: 2015 Asheville Asheville Fringe Arts Festival Larisa Karr NC performance The Blue Banner theatre