Hitting the Long and Winding Road to Pitchfork: a Journey, a Destination, a Delight (Part 1)


We hit the road from North Carolina yesterday, prepared for a weekend of fun and excitement. A much-anticipated American road trip was about to begin, and we were going to Chicago for the Pitchfork Music Festival. Aside from an elderly man in a Hawaiian shirt growling at me while smiling at a gas station in North Carolina, the drive through the night of Wednesday, July 16th, 2015, was peaceful and sedate. My accompanying photographer Makeda and I blasted tunes from various Pitchfork performers, psyching ourselves up for the music extravaganza we were funnelling ourselves into. We had a midnight nosh-fest at a trashy Dennys, coffee was poured, food was consumed, and we had plans to hit the road for a hostel in Indianapolis, a city that I had never been to. 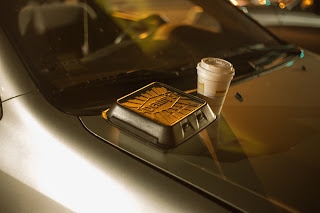 We should have known better just by nobody answering the phone after midnight. But, we're optimists. So we drive full-throttle into the city, expecting a cozy little hostel cutely tucked onto some block in the middle of a traditionally rust-belt, American metropolis. But no, we spent the early hours of 3 am driving around a very monotonous, depressing, stoic part of Indianapolis only to find that the hostel had indeed closed. WHAT KIND OF HOSTEL CLOSES?!
With the frustration settling in, we piled back into the car with the objective of finding a place to hang our heads for the night. Makeda pulled up the location of a motel not too far away on her phone, with reviews ranging from 1 star for "no room service" to 5 stars for "every great soul." We got there, and promptly understood the one star rating. The sign outside the Gateway Motel was illegible. Literally. The word that was supposed to be "room" was instead "oom," and this was indicative of how every other word on the sign was spelled. An elderly Indian man who looked like he had been alive for one hundred and fifty years answered the buzzer. In what I can only translate from my memory as slow motion, I paid the $55.50 total for the room and retrieved a sea-green pastel room key to 107.
As I walked across the lot to the room, I was beginning to realize $25.00 per person might have been too steep. 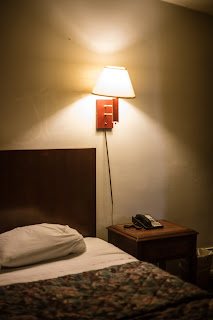 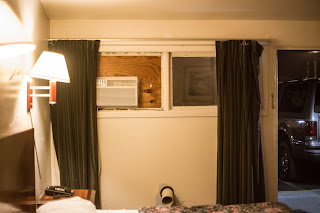 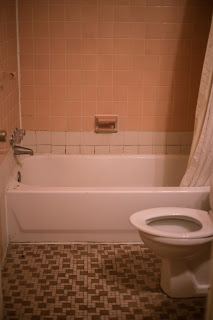 A strong musty odour permeated the room, which seemed so chalky I could barely breathe. A roach lay turned over, dead, on the bathroom floor and fresh cigarette ashes were nestled in the sink drain. But, oh no, that was not the end of it. Blatantly splattered on the ceiling and the wall was what we can only hope was Tabasco sauce. 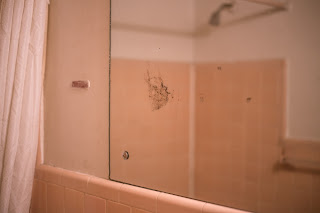 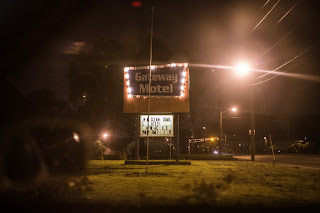 Needless to say, we were both freaking out and imagining the horror scenes that must have taken place in this very room, and couldn't go to sleep for a while under the (no doubt bedbug-infested) mattress. I eventually made it into a dream land by telling myself that I was not really where I thought I was.
The next morning, it was high time to wave goodbye to the "Gateway to Hell" Motel and zoom the 3 hours left on the road to Chicago. We were tired, we were hungry, we were at wits end. But come 11 o'clock, the flat plains of land finally started disappearing and turned into industrially-sturdy skyscrapers. As we zoomed along the highway into the mouth of the Windy City, we felt a sigh of relief.

Later, upon doing Internet research, I found some fairly unsurprising history about the lovely motel, including: this, this, this, and this. In short, lovely evidence that you should indeed book a room.