Hitting the Long and Winding Road to Pitchfork: a Journey, a Destination, a Delight (Part 2)

By the time we arrived at the festival, we were pretty exhausted. Dehydrated, achy and feeling generally stressed from the pressure to find a parking spot before the press gate closed, it was a relief to finally walk through the not-too-uncontrollable lines and find ourselves in the middle of Union Park. By this point, we were starting to notice the populace attending Pitchfork were surprisingly far from the uber-hipsters we were expected. They were (dare I say it) normcore (!!!) 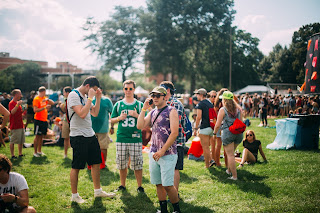 The outfits were not unlike anything you'd see any Frappuccino-toting consumer wearing at a mall in anywhere, USA. Bermuda shorts! pastel polos! fanny packs! rainbow-umbrella hats! If it makes you cringe, it was there. The demographics, as well, were surprisingly surprising. A lot more middle-aged, baby boomer-types were swarming about the Park than I could ever have expected. Who knew they knew about Pitchfork?!
And there was, of course, the occasional odd-ball, the hairy, shirtless man in the Hawaiian trunks who was (not) rocking the fanny pack nor the chain necklaces he decked himself out with.
There was no time, however, to waste by gawking at the solid state of everyone's shitty fashion. We had shows to catch, glorious voices to hear, and photos to take. 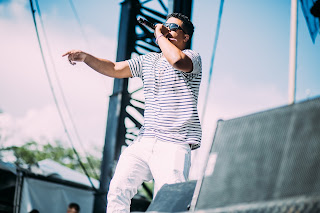 The sun was weighing down heavily, green dragonflies were buzzing overhead, weed was flagrantly inhaled and the gruff, tattooed security guards much rather resembled carnival workers than workers at any other entertainment event. There was also a girl who had already passed out, and was being lifted to the side of the stage still in a seated position.
A proper festival indeed.
Once he burst onto the stage, crisp in a black-and-white striped shirt and white pants, the audience jumped into true fan mode.
The bouncy trap music had all the normcore kids bedecked in baseball caps punchily lifting their hands in the air and bouncing up and down, leaving the wrangled sweat clinging to their foreheads to fly onto everyone else.
I'm not normally a fan of "trap-py" music, but the energy and joy Makonnen brought to his set was infectious. He incorporates serious songs about inner demons with more comical songs about flip phones and "getting turnt." What made his set especially great was when he called his mom up on his phone's camera and showed the audience to her while he beamed exuberantly.
With the trademark chant of "Super Super Chef Makonnen, Sprinkle Melatonin" woven throughout his set, ILoveMakonnen got the festival off on the right, groovin' note. 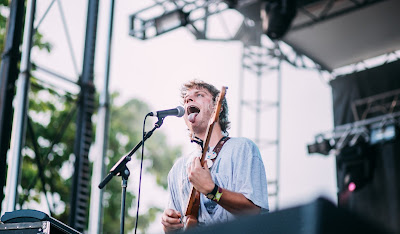 The energy and anticipation toward Mac DeMarco's set was present quite a while before he took the stage. Personally, I had not really listened to his music before, but from what I understood, he had a huge following. Now, my anticipation buckled itself into gear as I stood amongst the crowd, eager to see what had the fangirls so crazy and the bros so radical. I was expecting some sort of heartthrob, perhaps broody, but when DeMarco came out, it was evident that he was not your average sexy crooner. He was wearing a Nirvana shirt that had the quote "I hate myself and want to die," stuck his tongue out while smiling to himself, and declared, "Cigarettes are fucking disgusting" before he chain-smoked five or so.  Also adding to the "I'm just really an average guy" schtick was his accompanying guitarist, Andrew Charles White, who donned a trucker hat, pastel-pink shorts and neon orange sunglasses. It was an excellent moment when a strong gust of wind from the overcast sky perfectly accompanied and built itself into one of White's riotous guitar solos. The leisurely afternoon air extended into DeMarco's set, as the bridges throughout his low-fi, surf-rock-y esque songs were beautifully drawn out and languished. Already establishing himself as a "blue-collar rock star," DeMarco received even more applause when he announced to the audience that his new album had leaked, "and you can listen to it if you want. I don't give a shit." 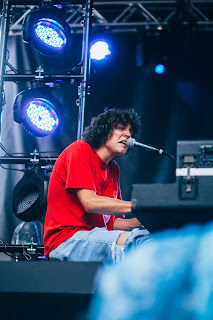 As the crowd gathered at the blue stage, members from the band HAIM burst to the front and ran onto the stage. One screamed, "Excuse me! I have Toby's pills!" I had no idea what a performer that had a friend openly disclosing this in front of so many people would be like, but so what? From that point forward, Jesso put on an amazing set, revealing that he is indeed a prodigy, he's full of energy and he is hella entertaining. Also hailing from Canada like DeMarco, Jesso has the charm and charisma of an impish little boy who is just ready to play music and share it with everyone by sprinkling it on their ears. Singer/songwriters like Billy Joel and Elton John are all from an older generation, and it would seem unlikely that a modern contemporary of theirs would emerge. But, he has, and Jesso, who reminded Makeda of two of her ex-lovers, is indeed that contemporary. Equipped with a full band, including violin, trumpet, sax and bass, Jesso sat hunched on his piano bench, ready to let loose. The only problem was the sound-system. Having had his set cut short because of an excessively long soundcheck, Jesso became quite frustrated when the sound on the piano was less than fantastic, even exclaiming sarcastically at one point, "This piano sounds like shit! It sounds like shit! I mean, it sounds fucking rad! It's the best piano I've ever played!" Jesso still played his heart out, however, on all the songs, including the yearning ballad "Without You"  and the haunting "Hollywood," thus stealing the hearts of the audience away, myself included. 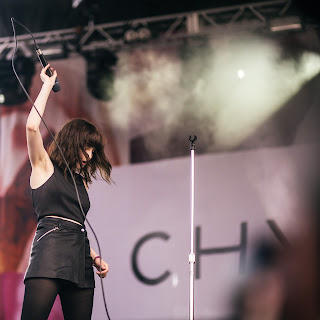 If you were to photograph the crowd for Chvrches and ask someone to guess which band was performing, the answer would not come. Hipsters mingled with elder Grateful Dead-heads under the late afternoon sun to catch one of the most exciting bands from across the pond bring their optimistic and minimal synth-pop to the Windy City. The lead singer, Lauren Mayberry, looked like a bad-ass biker bitch who just stepped out of the pages of Vogue and could choke everyone with her stiletto, but when she opened her voice, the audience was mesmerized. Speaking in a high-pitched, but tomboy-esque  cadence, Mayberry smartly introduced the band's aesthetic by stating "we're way too British for all this sunshine shit."
Nevertheless, the crowd reacted to and loved their brand of faint gloom. An especially funny moment was when she found DeMarco's left-over cigarette butts and reiterated his earlier sentiment, albeit seriously, "That's disgusting. Smoking is bad for you guys!" Both Iain Cook and Martin Doherty on bass and keyboard added the subtly dark broodiness that built up like smooth glass around Mayberry's lullaby-like voice, creating a set strong in intensity and also in suspense.

I've liked pretty much everything by Wilco I have heard up until this point, so I wasn't opposed to seeing them in concert. The crowd was as jam-packed as you'd expect them to be for one of the headliners, and the usual suspects were there: the hipsters, the basic bitches and bros, the elders and the stoners. As a band that started out country and then grew to gain many more influences and sounds, they have a large, cult-like fanbase that has grown over time and their night at Pitchfork was an incorporation of all the different types of Wilco for the Wilco fans. A lot of the set sounded instrumentally like a Johnny Cash song, but there were a lot of scrawny, 90's rock influences as well.
When you've had a headache all day, there comes a point, when, all of a sudden, you can feel the knots start to unwind and stretch themselves out before going to sleep. Listening to Wilco has the same effect on the brain as a decaying headache. Soothing but melancholy, brooding but relatable, the adoration from the band's fanbase was consistently strong throughout their set.

The original version of this article was published in The Blue Banner.