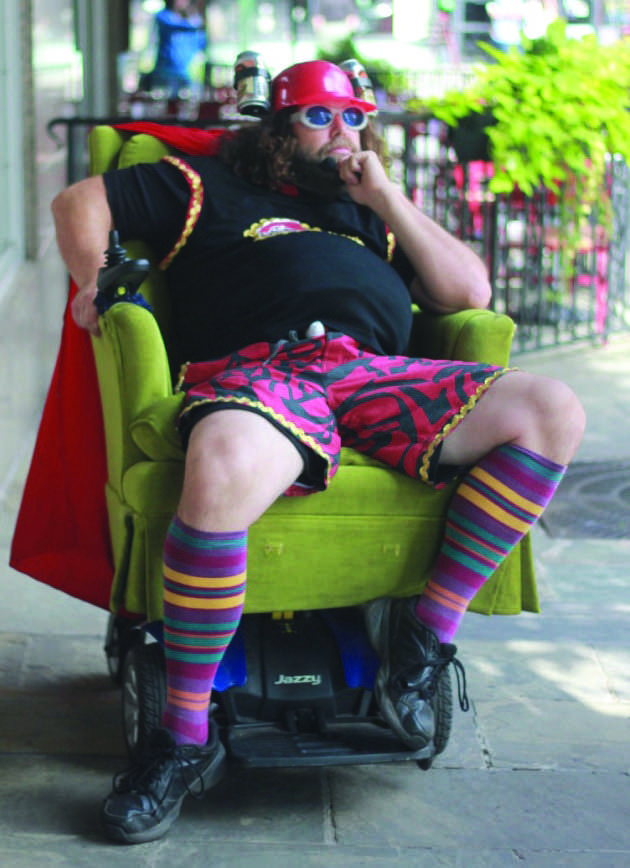 “Beer Man,”originally from Asheville
“I was born in 1996, back when Highland Brewery first opened its doors. That was back when the drinking age was embryo.”
And you partook in that, clearly.
“Yes, absolutely. That is why I’ve maintained my svelte figure to this day. It’s a long time of drinking.”
What do you do in terms of profession?
“Well, I travel throughout Asheville and prevent people from making bad beer decisions. I promote local, local only. I just caught a guy drinking a Miller Lite a minute ago and you know what I did? I drank that beer so he wouldn’t have to. I didn’t want to do it. It’s not like he owed it to me.”
How do you get away with openly drinking on the street?
“Well, this is just a costume. I know the rules. I don’t drink openly. I don’t drink and tell, over-drink, binge drink, or in general, alcoholic behavior. I like to enjoy delicious beer that’s brewed locally here by the gods that are the brewmasters in Asheville, North Carolina.”
What are three words to describe your style?
“Let’s go Kanye West combined with Chris Farley combined with Cher. There you go, drop the mic.”
Who inspires you?
“Good question. Who inspires Beer Man? Well, I guess Duff Man would inspire me, although he’s a little more physically fit. He’s kind of a show-off and I have a chair called the Beermobile 3000 that I use to accentuate my flat-out, dope style. I can do a full 360 and even moonwalk in it. Check it out, pretty impressive stuff.”
When did you realize that you were Beer Man?
“Do you know pretty much when you wake up and ask ‘do I want to eat oatmeal today or something that’s a lot better than oatmeal? Do I want to have a cup of coffee or perhaps some water to hydrate my unnourished body?’ I wake up everyday thinking, ‘I want to have another delicious beer. I’m just going to call myself Beer Man and dress like the part.’ So, that’s basically my daily do’s and don’ts. Always be yourself. Stay in school. ”
Is that your personal motto?
“Always be yourself or stay in school? Because it wasn’t stay in school. I mean, look at me. Come ON! Hahahaha. I definitely didn’t stay in school. But, you know, sometimes our purpose in life is to serve as a warning to others. That’s my motto. Print it.”
What would you say are the best and worst beers in Asheville?
“Oooh, that’s a tough question. Right now, my personal favourite is ‘Perfect Day IPA’ from Asheville Pizza & Brewing. My least favorite beer in Asheville is at this new place that just opened up called Suba Brew. It’s just some guy in the back of his Subaru that brewed up something called ‘Clingman Ave. Co-op’ and it is terrible. I think he used sardine oil in it. I don’t know.”