A history of scandals: looking at 30 years of AMS debacles 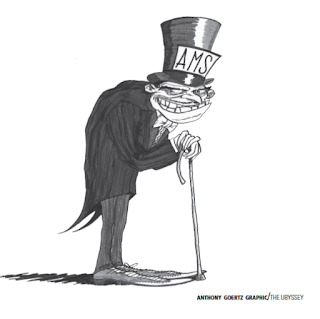 The AMS elections are full of scandals, disqualifications and penalties. Is this year’s the worst? The Ubyssey brings you a history of past scandals during election time.
1971: Hanson Lau is declared president, but the election is thrown out and a new one takes place due to the use of a proxy vote, polls opening late and people voting multiple times. Lau loses the second round.
1975: Someone writes “University Bursar William White” (Bursar was the former title for the VP Finance) on the ballot for ombudsperson. The administrator comes in second. Eileen Brown wins the election after White’s votes are removed and redistributed according to preferential votes. A rule is implemented that all candidates have to submit their nomination papers in person as a result. One election ends in a tie and is determined with a coin toss.
1982: In October, Student Court throws out the Administration Director by-election because of campaign irregularities.
1999: Losing presidential candidate Scott Morishita wishes to challenge the election of Ryan Marshall, but there is no student court to which he can voice his appeal. There is an attempt to revive the court, but it is too late.
2001: The Elections Committee denies the request for recount from defeated Students’ Voice presidential candidate Rob Nagai and VP Academic and University Affairs Josh Bowman. Nagai lost by 47 votes, and Bowman by 57.
2003: Spencer Keys, Arts representative and VP Administration candidate, petitions to have newly-elected VP Administration Josh Bowman disqualified for distributing promotional fliers at Totem residence during the campaign. The Elections Committee rejects the appeal. Additionally, the slate Students’ Progressive Action Network (SPAN) is ordered to remove all campaign posters in violation of a rule against pamphleting on residences.
The elections administrator resigns the month before the January elections, causing the Chief Returning Officer to be named as a replacement, but Council refuses to appoint him. Council tries to find a new one in the middle of the meeting, so that there could be someone to run the election.
2004: Board of Governors (BoG) candidate Brian Duong is disqualified because information is leaked regarding who is winning the BoG race while the elections are still going on. He appeals and wins.
2005: VP External candidate Jessica Klug is listed as “Kulg, Jessica” on the online ballot for two days and is then listed as “Jess Klung” on the AMS Elections website after she wins. Elections Administrator Anthony Waldron is MIA for several key events during the campaign.
A rumour circulates that Paul Sutton will be disqualified, and Waldron is noticeably absent. Spencer Keys is allowed to run, although at the time of his nomination, he was out of the country and could not submit his papers in person. Keys wins the presidential race.
2006: Lyle McMahon runs for Board of Governors, but his nomination is rejected because international students are prohibited from running for BoG. He launches an appeal against the decision. McMahon never serves on BoG, but in response to pressure from BC’s Student Societies, the restriction is removed on March 30 of the same year.
2008: The VP Administration race is canceled due to campaign irregularities allegedly provoked by candidate Yian Messoloras. Messoloras had been encouraging students to use Webvote on his laptop to vote for him. Elections Administrator Brendan Piovesan waits beyond 72 hours to correct the “election irregularities” and stops the elections a day before the polls close. Tristan Markle is declared the winner in mid-February.
Newly elected VP Academic and University Affairs Alex Lougheed comes under fire for voting multiple times in an attempt to protest against the non-anonymity of the voting system. Student Court rules that Lougheed should be disqualified, but AMS Council overturns the decision and allows Lougheed to stay on in his position. The term “Lougheed-gate” is coined by media.
2009: Tensions run tight to get the Condorcet system to work in a hurry, as campaigning begins with the Elections Committee still unsure whether the system will be implemented in time. Presidential candidate Blake Frederick is disqualified for his apparent engagement in “slate-like behaviour” two days after being declared victorious. Runner-up Alex Monegro alleges that Frederick was campaigning and postering with other candidates who had similar platforms. The Appeals Committee later overturned their original decision and re-named Frederick president.

The original version of this article was published in The Ubyssey.